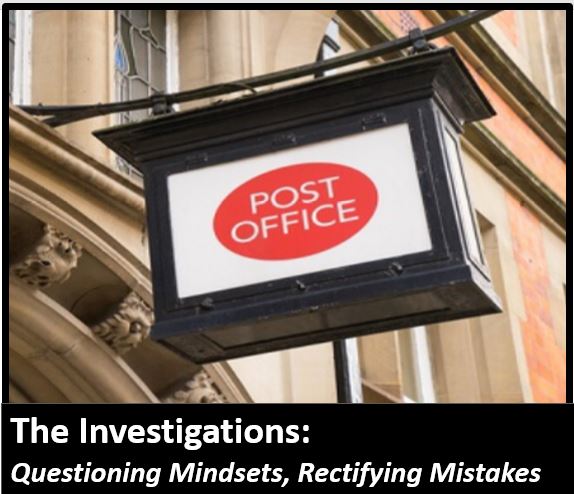 It would be unjust to jump to conclusions concerning the Post Office investigations implicit in the High Court case of Bates v Post Office Ltd. (no.3) [2019].  But the Bates case raises questions about the veracity of hundreds of investigations and charges brought by the Post Office, accusing their sub-postmasters of fraud and false accounting.  Six sub-postmasters went to prison.  Others suffered serious impact on their lives and careers.  All arising from one focal point: the (now proved to be) fault-riddled ‘Horizon’ accounting system.

So, where did it go wrong?

The term “Groupthink” was defined by the psychologist Irving Janis in 1972. Groupthink behavior occurs amongst cohesive groups and ‘teams’ under an illusion that they are invulnerable. They fixate on ‘rationalising’ what they as a group choose to believe instead of rationalising the case in hand. This leads to negatively stereotyping others and poor decision-making.  Simultaneously, the conformity pressure kicks in, when such groups have ‘mind guards’ nullifying objectivity (Janis, 1972)

For me, groupthink held two dominant points in the pattern of the Post Office investigations. First, was the case-after-case imposing of unverified IT evidence, thereby pursing this artificial line of logic to a place where injustice was waiting.

Secondly, ‘noble cause corruption’.  Motivation to ‘do the right thing’ driven by the notion that the person is “guilty anyway” (and I wish I had a cent for every time I have heard that utterance) usually grounded in cognitive bias, looking to secure confirmation rather than searching for facilitation.  One of the manifestations of tunnel-vision investigation is when evidence is either suppressed or withheld from the defence.  A breach of the Criminal Procedure and Investigations Act 1996 (‘CPIA’).  Crossing the line by an investigator can be an error or oversight, maybe because s/he is ‘passionate’ in the ‘fight against fraud’ but still a patent breach of criminal procedure.

Indeed, ‘losses’ and ‘shortfalls’ were calculated by an unreliable accounting system. But the fact-constricted evidence generated by ‘Horizon’ was adulated as dominant over investigative methodology that could have clarified concerns either way.  It followed that the prosecution evidence from the Horizon system morphed into a form of ‘documentary hearsay’ and took route no.1 to court.

To demonstrate, a sub-postmaster was accused of stealing £36,000 despite one PO investigator’s report that stated … “unable to find any evidence of theft or that the cash figures had been deliberately inflated» but the sub-postmaster was charged and received a community sentence.   A charge of theft was tacked onto the side of the other allegations, but as in other cases, the theft charge was dropped – provided the defendant pleaded guilty to false accounting. Yet no new evidence came to light after that report that clearly stated (her) innocence.  Given the investigator’s findings were overruled, then that particular prosecution I trust will be among those cases under formal review by the CCRC.

Collaterally, sub-postmasters under investigation had reports, data, produced to them as sacrosanct.  Postmasters didn’t have the technical know-how in stressful conditions to challenge back about ‘bugs’ and ‘worms’ in the Horizon system.  No, all they had was hope that somebody would believe them…

And so, from the refusal by Post Office management to entertain complaints or have a bad word said about their “robust” Horizon system – and how prosecutions were conducted, I deduce the investigators’ approach was largely shaped by groupthink, with intentions to corner postmasters into entering guilty pleas and stifle the legal ability of these people to defend themselves.

The ‘disclosing of lack of disclosure’ was affirmed by Lord Frazer (in the High Court).  But even if the IT evidence was validated (per section 69 Police and Criminal Evidence Act 1984) in the criminal prosecutions, questions remain about how that evidence was positioned in the case.

Answering this, UK barrister Stephen Mason, an expert on computer evidence, commented in detail on the problem of many lawyers, let alone investigators or jurors, who do not understand the nature of ‘technical evidence’.  IT systems that have worked so many times and never had previous problems are common (biased) investigation attitudes.

Based on this and other observations, arguably the Post Office had a hold over the criminal courts as well.  Plea-bargaining is not new, but the way it went on before sub-postmasters appeared in the dock is open to question.  At court, if so many lawyers and other experts lack capability in assessing technical evidence – but without taking recourse to examining supporting testimony, and /or what influenced its admission as evidence (linked to disclosure issues) then this problem manifested itself mostly if not exclusively to the detriment of defendants.

What does the current ‘PO’ fraud investigations training programme look like?

And finally, where does the litigation leave the Post Office?

Official calls are underway for the legal authority of the post office (to conduct its own prosecutions) to be removed.  Expect those calls to continue, because from the PO’s side, the Bates case has given a message of gratuitous finger-pointing as their investigations’ culture, promulgated by the calls for a judicial enquiry, besides the referrals to the CCRC and the Director of Public Prosecutions.

Therefore, despite its benevolent image, the ‘PO’ now have a major challenge in convincing first, their sub-postmasters, and the courts they are fit to retain that authority.  A concern highlighted by the outcome of the £58m settlement in the High Court in December 2019.